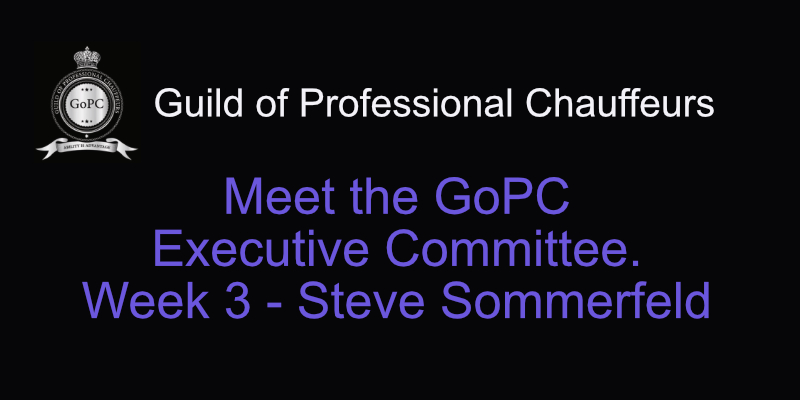 The Guild of Professional Chauffeurs would like to take you behind the scenes and introduce to you some members of its Executive Committee.

The GoPC is proud of the cross-section of talent from across the industry that makes up its management team – between them they cover every possible skill set required to help represent and support the chauffeur industry at its best. 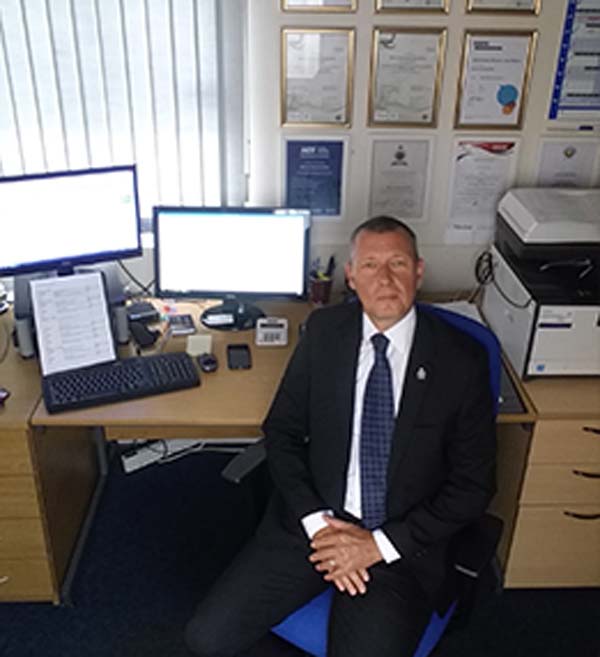 This week it’s the turn of Steve Sommerfeld, the Guild's current serving Chairman.

We hope you enjoy meeting us! We're here to help the industry where we can, whether you are a member or non-member. Please feel free to chat with us – [email protected].  Or find us on social media.

Question: How long have you been involved in the industry?

Steve: “My career spans 28 years in the areas of chauffeuring, operations management, and freelance security driving. My life before this was in Post Office Engineering, then retail sales management and customer services”.

Question: What have you been up to in that time?

Steve: “I was a Chauffeur Operations Manager for a large London based chauffeur service for 15 years, I then went on to have my own QSi award-winning chauffeur company for 8 years. I sold the business and took a year off in Spain - then returned to the UK to qualify and work as a freelance security driver. I’m now employed as the Chauffeur Services Manager for the Marshall of Cambridge Group, and I’m based within Cambridge Airport - which Marshall own and run, and it’s used by both Marshall Aerospace & Defence, and Cambridge City Airport."

Question: What do you consider are some of the highlights of your career?

Steve: “I’ve been incredibly lucky and enjoyed a colourful career. Some of the most memorable parts would be:

Question: What chauffeur/driving industry qualifications do you have?

I’m hoping to travel to New York in 2021 to undertake the Vehicle Dynamics Institute’s (Tony Scotti School) course in security driving – it’s supposedly the best in the world.”

Question: What are your opinions on training?

Steve: “Personally I think training – or ‘learning’ - is really important, no matter how old you are or however long you’ve been in the industry. Most other professional industries embrace CPD – that’s Continuing Professional Development. The UK chauffeur industry is definitely behind the times when it comes to accepting training as the ‘norm’. Only good things can come from improving your existing skills, and even learning new ones! You’re never too old to learn. It gives you an edge over your competition, and means a safer and better service for your clients”

Question: What was the most embarrassing thing that has happened to you when chauffeuring?

Steve: “Well, from 28 years in the game there’s definitely a lot to choose from! I’ll tell you about the time when I was driving an American recording artist and her entourage in London. She was feeling poorly and her assistant booked an appointment with a Harley Street private surgery. We were followed to the doctors from the clients Mayfair hotel by a couple of Paparazzi on their motorbikes. She got in there OK, but her security (Dave ‘Bulldog’) called down to ask me to relocate and collect the group from a discreet back door in a mews, so that the Papps didn’t get any photos, which the Principle really didn’t want. They described the back door and its location and off I went, followed of course by the Papps who I couldn’t shake off. I was driving a Viano (it was 2013) I found the doorway and spent about 15 minutes carefully shuffling the car back and forth, back and forth, until it was parked millimeters away from the wall. The Papps watched me, intrigued, whilst eating their packed lunch. My Viano side door was now in line with the back door of the building, and there was no gap (at all!) for an unwelcome camera lens to look down. I called back up to the security and proudly announced my genius efforts, and that they’d love what I had done – they could now literally walk out the building’s back door and climb straight into the side opening of the MPV. Simples! I was praised, thanked, and advised they were on their way down in 3 minutes. I was so proud – I had outwitted the Papps, and the clients would love me. I was sitting there all smug, telling myself things like: “You were born to do this, you bloody LEGEND!” I was SO pleased with myself, and I stared without blinking at the doorway waiting for it to open, and for the impressed entourage to move seamlessly into the Viano. Just then I heard a loud shout – it was one of the Papps - he was saying ‘”Oi! Mate!” and pointing to somewhere about 20 feet away. To my horror I saw Dave ‘Bulldog’, very red-faced and waving his arms crazily in the air.

I was parked in the wrong doorway!"

Question: Where are you based and what services do you offer?

Steve: “Although originally from London I’m now work-based in Cambridge, and I’m responsible for running a purely internal chauffeur service for the Marshall Group of Companies, which includes Marshall Aerospace and Defence. The family owned business turns over around £2.5 billion per year, and it all started as a chauffeur service back in 1909! I hold a South Cambridgeshire Operators Licence and a Private Hire drivers’ licence (which required a pass of one of the toughest knowledge tests in the UK!). I report directly to a Board Director of the ‘umbrella’ company. We operate Mercedes-Benz S500’s, long wheelbase Range Rover, Volvo V90 ‘Cross Country’ and Mercedes-Benz V-Class. We serve the Marshall family members, senior company officers, private clients from the private jet centre (Cambridge City Airport) and visiting VIP’s and clients. My team all have RoSPA Gold level Advance Driving qualifications."

Question: What attracted you to the Guild of Professional Chauffeurs and why do you think it’s important?

Steve: “I’m a founding member of the Guild of Professional Chauffeurs. A team of like-minded chauffeurs set this up, as we were concerned over the ever-decreasing standards and reputation of our much-loved industry. There was no-one else out there trying to make a real difference, so we decided to try to do something rather than just feel ‘peed off’. My role as Chairman is purely an administrative one, and I’m not better than anyone else – far from it! We want to help other chauffeurs who feel the way we do – we love our profession and we believe there is a real skill set involved, and that really decent chauffeuring is an art form. Joining the Guild simply says to the world that you are a professional, and you’ve got proof! The lapel pin badge is worn with pride, as it’s evidence of your skills”

Question: Thank you very much for the interview and sharing your career with us.