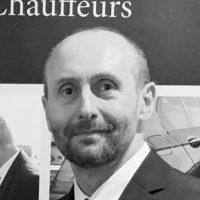 Hello,  My name is Matthew Byrne and I am the owner and Principle Chauffeur of MB Executive Chauffeurs Ltd, which is based in Worksop, between Sheffield and Doncaster, on the Nottinghamshire / South Yorkshire border.  We operate a Mercedes S Class S350 Ld and a Mercedes V Class V300 AMG XLWB.

My chauffeuring career spans 30 years and began as a Staff Car Driver in the Royal Corp of Transport branch of the British Army in 1989.  During my Army career, I obtained all the relevant Staff Car / Military Chauffeur qualifications available to my trade.  I also had the privilege of attending and passing the Police Advanced Drivers Course in Devizes Wiltshire attaining the Class 1 qualification as well as the Protective Mobile Skills course at Royal Military Police CPU Longmoor.

My Army driving career started with my first posting in Germany, followed by Northern Ireland, where I spent 3 years as the VIP/CP Driver working closely alongside personnel from an RMP Close Protection Unit (CPU).  My Military career concluded as a CP Driver to a British 3 Star General in Baghdad, Iraq and upon finishing my tour, this, in turn, led me to return to Iraq as a civilian Close Protection Driver working within a security team looking after civilian and military personnel from the US Department of Defense (DoD) and US Army Corp of Engineers involved in reconstruction projects, Countrywide and also including Afghanistan.

My next chauffeuring post upon leaving Iraq, took me to London where I was part of a two-man security chauffeur team looking after the Group CEO of Top FTSE 100 Company based in the City.  I then made the decision to return home from London permanently, as I wanted to be closer to my family and young children, whilst focussing on setting up my own chauffeur business.

I live and breathe chauffeuring / security driving- it’s all I have ever known throughout my professional working life and I am very passionate about the personal service that I provide, whether to private or corporate clients.  My personal value and standards mirror those of the British Army, which I approach every day with Courage, Discipline, Respect for Others, Integrity, Loyalty and Selfless Commitment are much more than words on a page to me; they are what I stand for 24/7 365!

Being a proud member of the GoPC means my skills, formal training and experience have been independently assessed by a Professional Trade Organisation and therefore you can be confident that my skills and services are of an exceptionally high standard.

I look forward to possibly being of service to you.

Copies of certification and references are available upon request.