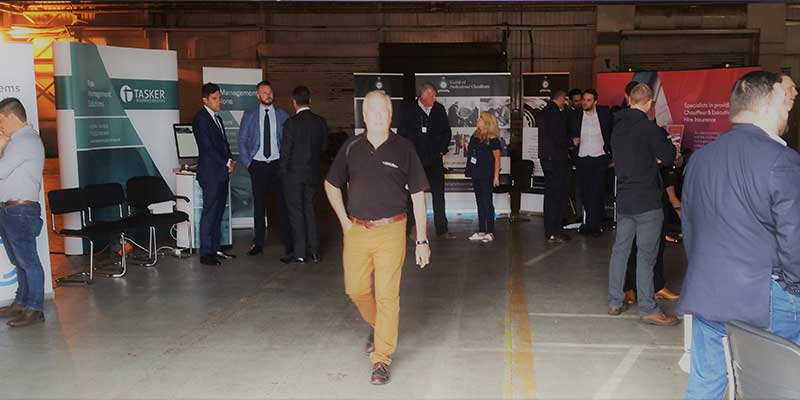 After a few months of careful planning and last-minute nerves we have to say that the very first ‘Meet the Guild’ networking event was a fantastic success, and far exceeded our expectations.

From the very beginning the event was always publicised as a casual, laid back affair and was intended to be a great addition to anyone’s Bank Holiday weekend. Anyone who’s even vaguely interested in saving and promoting the professional chauffeur industry, that is.

The committee and members of the Guild of Professional Chauffeurs (GoPC) are not professional event organisers and were not looking to make a profit. Instead, they wanted to create a platform where awareness could be raised, and for those interested to be able to meet face-to-face and obtain a real understanding of why the Guild was created. And to discuss the very real threats that currently exist – that if left unchecked could see the vocation of a ‘Chauffeur’ simply fade away into oblivion here in the UK.

“Progression: Times change – the only thing that doesn’t is our first class service”

A quote from LCH’s stand. The GoPC was created to uphold what some may consider as old-fashioned values – understanding real service, a passion for excellence, integrity, and a pride in your chosen trade. Sadly, the reality in 2018 is that a culture of price-conditioning and lack of awareness of what real chauffeur standards are will see mediocre and unreliable car & driver services become the norm, and simply be ‘acceptable’. Perhaps because a new generation of executive PA’s and travel agents immersed in this culture simply don’t realise that you CAN be demanding and insist on quality, dependable luxury chauffeur services. Taxi driver, or real chauffeur? There IS a choice.

The GoPC believes, amongst many other things, that First Aid awareness should be introduced into the chauffeur industry, and that a passion for Ongoing Personal Development should be a standard and help to separate well-rounded professional chauffeurs from taxi drivers and the cheap, mediocre ‘mainstream’. At the networking event the Guild introduced Red-2 Medical, run by Simon Greenfield who has written an Emergency First Aid at Work course specifically aimed at professional drivers. A pre-booked class of 11 learners took the course and qualified with a 3-year vocational award. Something everyone involved with is extremely proud. With a course content specifically tailored to our industry the GoPC will no doubt be promoting future events and courses, in a bid to have First Aid considered a basic requirement.

As well as a great selection of quality companies and their stands inside the main hanger, the event had an exciting static car display outside on the runway. Some truly special vehicles including a Maserati Quattroporte, a fully loaded V12 engined BMW 7-Series, and the very latest Audi A8 LWB limousine – brimming with state-of-the-art technology. There truly was something for everyone at the event – it was buzzing with business networking, new potential Guild members chose assessment dates to attend, and also a few new friendships were formed along the way. Considering this was a casual event run the volunteers of the newly formed GoPC, we feel both humble and proud simultaneously that not only was the constant arrival of people throughout the course of the afternoon testimony to the industry’s support of the Guild, but also that so many care about our beloved industry and that we stand a real chance to make a change for the better.

We look forward to bigger and even better events in the near future – watch this space!