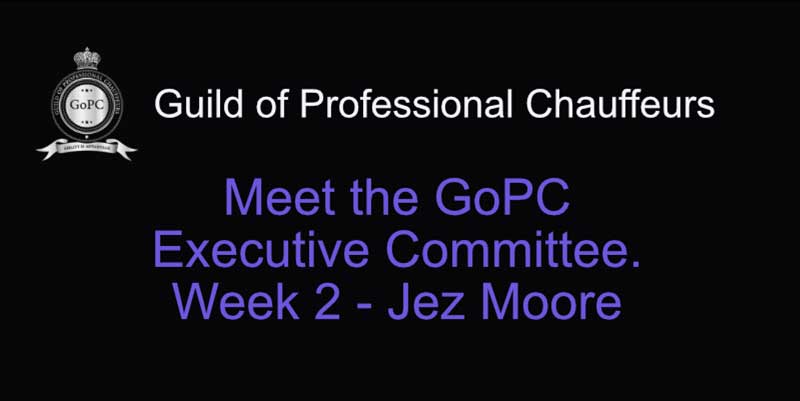 The Guild of Professional Chauffeurs would like to take you behind the scenes and introduce to you some members of its Executive Committee. Each week we will post a 'bio' of a different member.

We hope you enjoy meeting us!

We're here to help the industry where we can, member or non-member – please feel free to contact us if you want to chat. Message us via social media or our website, leaving your contact number if you’d like a specific member of the team to call you back. 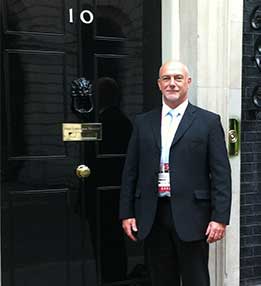 This week – it’s the turn of Jez Moore, the Guild's social media sub-committee Chair. The GoPC is proud of the cross-section of talent from across the industry that makes up its management team, and each member brings something special to the table. Ladies and gents - please meet Mr. Jez Moore.

Jez: “Hi, I’m the Guild’s social media guru. I am responsible for the running of our Facebook, LinkedIn and Twitter pages. I am also a Membership Assessor and an Ambassador for the Guild."

Question: How long have you been involved in the industry?

Jez: “I started my chauffer business in 2013 after 30 years in the Police so I am a relative newbie to the chauffeur world”.

Jez: “I am a time served mechanical & production engineer. I spent 30 years in the Police force. 18 years in West Yorkshire Police and 12 years in North Yorkshire police. In West Yorkshire I spent 8 years on Road Traffic after completing my advanced driving course for both cars and motorcycles. I became an authorised vehicle examiner and a qualified accident investigator.
When I transferred to North Yorkshire police, I joined the Firearms support unit and completed another advanced driving course along with the National Firearms Course.
In my role as a firearms officer I spent a couple of years working on the Counter Terrorist Unit. My specialism within the Armed Response Unit was close protection. I attended and completed my national close protection course with Greater Manchester Police. I also did my protection drivers course, anti-hijack course and evasive tactics course."

Question: What would you say are the highlights of your career to date?

Jez: “I have driven most of the current Royal Family in my CP role and been involved in some amazing events such as Royal Ascot, G8 summit, G20 Conference, Afghan Conference, 2010 Election campaign. After the 2010 elections, the RH William Hague MP became the Foreign Secretary and I was very proud to be part of his protection team for a few years. I would say that the highlight of my career would have been working as a Close Protection officer during the 2012 Olympics and Paralympics I London. That was an experience that I will never forget - stood inside the Olympic Stadium watching the opening and closing ceremonies, breath taking and quite emotional.”

Question: What chauffeur/driving industry qualifications do you have?

Jez: “I have completed numerous driving qualifications during my time in the Police which unfortunately are worth nothing in Civvie Street. I have completed several civilian courses since leaving the police. I have:

Question: What are your opinions on training?

Jez: “Most occupations have a CPD relevant to their role. I think as part of your own Continuous Professional Development it is important to keep up to date with your training for your own credibility. Whether it’s a driving course or reading the latest legislation I like to keep up to date with things. Too many drivers say things like 'I’ve been driving for 20 years, what can you teach me?”'When did they last pick up a highway code and get up to date with new signs and regulations?"

Question: What was the most embarrassing thing that has happened to you when chauffeuring?

Jez: “Over the years I have had several, but professionalism prevents me from telling all. However, here are some I can talk about.

Locking a member of the Royal Family out of the car and being unable to unlock it. Letting a colleague sit in the car to warm up on a protection detail and he put the car into valet mode fiddling with the switches and knobs so we couldn’t get the luggage out of the boot at the airport. I was driving a member of the Royal family in a Mercedes Maybach at a very prestigious event. Everyone got in the car and I set off. The car wouldn’t go above walking pace and I couldn’t understand why. No warning lights other than seat belt light. I asked the PPO to put his seatbelt on which he did. I still had my foot on the accelerator. The car burst into life and we set of like we had just robbed a bank. Fortunately my passengers found it amusing as they disappeared in to the back seat..”

Question: Where are you based and what services do you offer?

Jez: “I am based in Yorkshire. I have an Operator’s licence and Private Hire Driver’s licence for Selby District Council and driving licences for Harrogate District and Hambleton District Council as I also drive cars belonging to Chauffeurs in those council areas. I drive a 2018 Audi A8L with a plate exemption and do a lot of sub-contracting for chauffeur companies both local and nationally.
I offer a chauffeur and close protection service, if required, for business travel, airport transfers, tours, weddings, Proms you name it we will do it. I also offer a loading service for game shooters during the shooting season from August 12th to the 31st January"

Question: What attracted you to the Guild of Professional Chauffeurs and why do you think it’s important?

Jez: “I wanted to know that I was doing it properly and be part of an organisation of drivers that were of the same mind set. There are too many people in this industry that have a nice car and call themselves chauffeurs. I wanted to be assessed by established professionals in the industry to make sure I was at the top of my game. Hopefully I would be able to pick up some tips and advice from other drivers. Since joining the GoPC I have met some really great people who I regularly get work from because of my membership of the GoPC. The reason being they know that because I am a certified member of the Guild I will provide a service second to none. Membership is a way of showing the world that you are a truly professional chauffeur”.

Question: Thank you very much for the interview and sharing your career with us.